The second trimester ultrasound is commonly performed between 18 and 22 weeks gestation. Historically the second trimester ultrasound was often the only routine scan offered in a pregnancy and so was expected to provide information about gestational age (correcting menstrual dates if necessary), fetal number and type of multiple pregnancy, placental position and pathology, as well as detecting fetal abnormalities.  Many patients now have several ultrasounds in their pregnancy with the first trimester nuchal translucency assessment becoming particularly common.   The second trimester ultrasound is now less often required for dating or detection of multiple pregnancies but remains very important to detect placental pathology and, despite advances in first trimester anomaly detection, remains an important ultrasound for the detection of fetal abnormalities. In order to maximize detection rates there is evidence that the ultrasound should be performed by operators with specific training in the detection of fetal abnormalities. 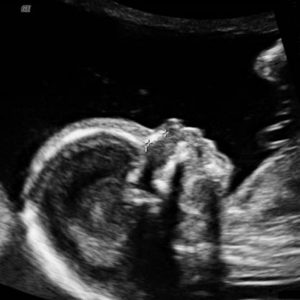