What is a kidney ultrasound? 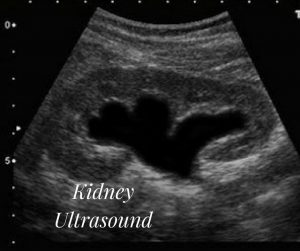 Another type of ultrasound is Doppler ultrasound, sometimes called a duplex study, used to show the speed and direction of blood flow within the chest. Unlike a standard ultrasound, some sound waves during the Doppler exam are audible.

Ultrasound may be safely used during pregnancy or in the presence of allergies to contrast dye, because no radiation or contrast dyes are used.